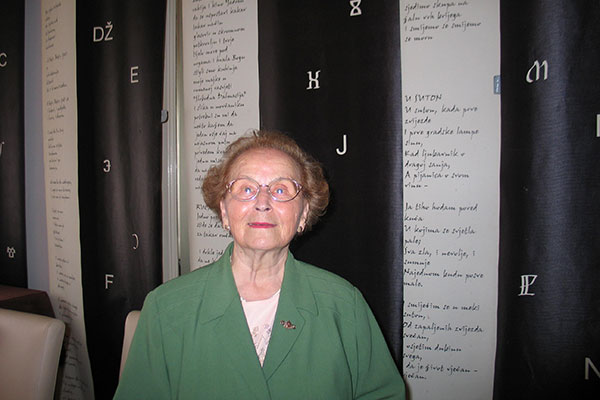 Joining the author to speak about the book were literary critic Darija Žilić, writer Lada Žigo and the book’s editor Antun Pavešković representing the Croatian Writers’ Society as the publisher.

Malkica Dugeč, a Croatian from Bosnia-Herzegovina that has lived for many decades in Germany, staged the promotion of her book Poticaj buđenju (An Encouragement to Awaken) at the Croatian Writers’ Society headquarters in Zagreb on the 20th of September. Joining the author to speak about the book were literary critic Darija Žilić, writer Lada Žigo and the book’s editor Antun Pavešković representing the Croatian Writers’ Society as the publisher. An inspired reading of the verse was offered by stage actor Joško Ševo. Joining the large audience of admirers of the oeuvre of Malkica Dugeč as a special guest of the promotion were pupils of August Šenoa Elementary School in Zagreb and their Croatian language teacher Ivka Bašić, offering their excellent recitation of the verses of our prominent emigrant poet.
Describing the volume as a harmonious lyrical work, critic Žilić noted that the collection comprised sixty poems – forty-three sonnets and fourteen prose/free style poems. The poetry of Malkica Dugeč is exclusively intimate in its nature. Editor Pavešković noted that the book is composed as four separate cycles with the telling titles of Soneti u rancu nada (Sonnets in the Haversack of Hope), Soneti za domovinu i prijatelje (Sonnets for the Homeland and Friends), Sonetna pisma (Sonnet Letters) and Poticaj buđenju (An Encouragement to Awaken). These lyrical sections are, however, interconnected by a consistent and firm triple interlace – in equal amounts interwoven of quotidian external forces and moods, internal spiritual elation, yearning, hope and burning, as clear reflections of a distant past and an uncertain future. In this vortex the present is reduced to the anticipation of light, awakening and aspiration – a transcendental flight into the blue of the sky as the only authentic possibility.

Malkica Dugeč (1936) is the most prolific Croatian female poet in the emigrant communities. She was born in Zavidovići in Bosnia-Herzegovina and moved to Croatia with her family in her secondary school years. She graduated from the University of Zagreb’s Faculty of Humanities and Social Sciences. She has worked as a Croatian language teacher and school principal across Croatia. She and her husband Božo were compelled to emigrate in 1972 for political reasons after the communist crackdown against the Croatian Spring movement – the Dugeč’s ran afoul of the regime in their effort to establish chapters of the Matrix Croatica culture institution across the northern Croatian region of Slavonia. They finally settled permanently in Stuttgart, and were awarded asylum in 1975.

She has published some thirty volumes of poetry and one book in prose. She joined Kazimir Katalinić in editing Nismo spremni robovati (We’re Not Willing To Be Enslaved), a book of speeches and essays by her late husband Božo published by the Croatian Republican League. Her worked has been translated and is featured in many anthologies. She is a recipient of the Dubravko Horvatić Prize for her series of poems Sebe ne vidiš nikada (You Never See Yourself), and the Croatian Writers of Herceg Bosna Society’s Antun Branko Šimić Literary Prize for the collection U riječ unjedrena (In Words Engulfed). In 2014 she won the Friar Lucijan Kordić Prize conferred by the Croatian Writers’ Association of Zagreb and by ZIRAL (Wounded Swan Publishing Community) of Mostar for her collection Žigice vjere (Matches of Faith).

Writer Lada Žigo noted that the copious poetry in the collections published by Malkic Dugeč over the past twenty-five years are not the fruit of a late blooming, but rather the result of the suppression and persecution of a generation of Croatian intellectuals in the communist clampdown against the Croatian Spring movement of the early 1970s. Her poetry is to be found in a number of anthologies, encyclopaedias and lexicons, including Šimun Šito Ćorić’s anthology 45 hrvatskih emigrantskih pisaca (45 Croatian Emigrant Writers); Mila si nam ti jedina (Only You Are Dear to Us), an anthology of Croatian patriotic poetry; Dunav (Danube), an anthology of Croatian poetry from the medieval to contemporary period edited by Dubravko Horvatić; Jezik i hrid (Language and the Rock), an anthology of works by Croatian writers from Bosnia-Herzegovina; and the Interkulturelle Literatur in Deutschland (Intercultural Literature in Germany) handbook. In a generational sense, however, Dugeč is proudest of her inclusion of the Cvrčak u boriku (Cicada in the Pine Woods) anthology of prose and poetry published by Školske novine of Zagreb in 1996.

Dugeč also writes in the German language and has an entry in the Croatian Encyclopaedia and in the Lexicon of Croatian emigrant and minority communities.

From the 1978 she and her, now deceased, husband and publicist Božo presented the legendary Republika Hrvatska magazine at the Frankfurt international book fair. This leading European book fair provided an exhibition stand to our courageous exiled intellectuals – Božo Dugeč was one of the names on the list of people who faced the lethal threat posed by agents of the former Yugoslavia’s UDB secret service. At the exhibition stand the Dugeč couple showcased Croatian émigré writers from around the world under the moniker The Words of Emigrant Croatia. Malkica Dugeč has, in this regard, rendered a great service to the Croatian literary presence on the European literary scene.