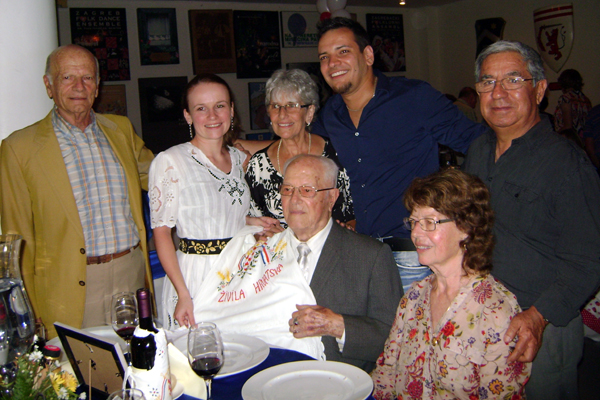 Mateo Fistonic left his native Zastražišće on the island of Hvar back in 1929 to move to Chile. He found employment at the saltpetre works, later as a merchant, married and had children… His son Ivo is an active member of the Croatian Home in Iquique and one of its current co-presidents.

Mateo Fistonic, who, as a sixteen-year-old left his native Zastražišće on the island of Hvar back in 1929, celebrated his one-hundredth birthday this January 30th. Although the news has made it to us belatedly from Iquique, we cannot but share in his and his family’s joy.
Recalling his arrival in Chile, this vital centenarian tells us, “We arrived in Iquique at 8 in the evening by ship, which could not dock because of the shallow waters, so they transferred us to the shore in small boats. They sent us to a hotel that had no beds, just planks, where we slept. I cried when I saw where I had come. I immediately found work in a saltpetre works. We carried sacks weighing a hundred kilograms and we had a hard time of it.”

Life led him to other waters and he worked later as a merchant, married Delfina Baccigaluppo with whom he had a daughter Katica and a son Ivo, an active member of the Croatian Home in Iquique and one of its current co-presidents. During his rich life Mateo Fistonic achieved economic security for himself and his family, ultimately the reason he left Dalmatia for distant South America.