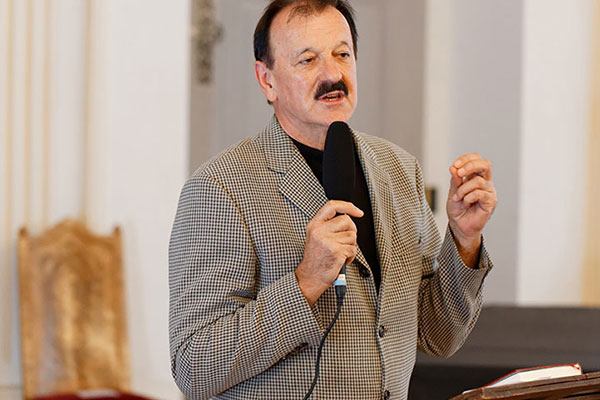 On hand to discuss the books were philologist Benjamin Tolić, Damir Pešorda, critic Tomislav Šovagović and Mate Kovačević and the director of the Croatian Culture Foundation and editor of Hrvatsko Slova writer Stjepan Šešelj, who also penned the foreword to Ćorić’s novel.

Three books by Dr Šimun Šito Ćorić were promoted in Zagreb at an event organised by the Croatian Culture Foundation and Hrvatsko Slovo. The packed auditorium of admirers of Ćorić’s work included Zdravka Bušić, state secretary at the foreign and European affairs ministry.

A versatile writer and tireless missionary, Ćorić has lived in Switzerland for many years. His broad and multilingual literary oeuvre now includes three new books in Croatian: short prose forms in Slušaj, Iris – Pisma iz Hrvatske 1990. i neke (Listen, Iris!: Letters from Croatia 199*); a travelogue from the holy land: S ljudima, prirodom i Bogom u Izraelu i Palestini (With People, Nature and God in Israel and Palestine); and the novel Izgleda, drugog puta nije bilo (Looks Like There Was No Other Way), which offers a number of linked stories that cover the history of one Croatian family in the whirlwind of the political turmoil of the Great War and also delves into the fate of Europe and of Croatia in it. On hand to discuss the books were philologist Benjamin Tolić, Damir Pešorda, critic Tomislav Šovagović and Mate Kovačević and the director of the Foundation (http://www.hkz.hr/) and editor of Hrvatsko Slova writer Stjepan Šešelj, who also penned the foreword to Ćorić’s novel.
Ćorić, also a singer-songwriter, expressed his gratitude with a song accompanied by guitar.

Šimun Šito Ćorić’s literary/documentary observations in Listen Iris!: Letters from Croatia 199* have clearly struck a note among readers. The book, co-published by Fram-Ziral and HKZ-Hrvatsko slovo, has been published in a number of foreign languages including German, Spanish, English and Lithuanian. The book emerged from writings in the worst days of the Homeland War when Croatians, having regained their liberty, were forging and defending their country from an overwhelming enemy. It was a time, presenters Kovač and Pešorda noted, when there was little sympathy or help from abroad in facing a brutal and evil attack. Listen, Iris!: Letters from Croatia 199* is divided into four sections – the Prologue; In the Lap of the Mediterranean; Listen, Iris!: Letters from Bosnia-Herzegovina 199*; and Post Scriptum.

Writer and friar Šimun Šito Ćorić was born in 1949 in the village of Paoča near Međugorje. His work has been included in numerous domestic and foreign anthologies. He is a full professor of psychology and teaches at the universities in Zagreb and Mostar. He has served as the president of the Croatian World Congress. He is the author of many collections of poetry, literary critiques and studies. A Franciscan monk, he works as a pastoral guide among the Croatians of Switzerland and is a psychologist, writer and a renowned culture activist. He earned a degree in philosophy is Sarajevo in 1973, degrees in German and theology in Luzern in 1975, and in English in Washington in 1982. Besides his diverse literary, philological and musical oeuvre, Ćorić also earned a master’s degree in psychology at Columbia University in New York, and his doctorate at the University of Zagreb with a dissertation on the Anxieties of Croatian Migrants. He is now active primarily as a missionary in the Swiss city of Bern. Ćorić’s scholarly work over the past quarter century with students of Croatian universities (Zagreb, Osijek, Zadar and Mostar) in the area of migrant psychology is also noteworthy. He is cited as a top anthologist of émigré writers from Croatia and Bosnia-Herzegovina. He is a member of the Herzegovinian Franciscan province, the Croatian Writers’ Society, the Swiss Pen Centre and of the Society of American Poets. His literary work (prose, poetry and stage plays) is imbued with spiritual themes.

His chief works are: The Years of Youth: A Psychological Contribution to the Development of Youth (1984), The Anxiety of Croatian Migrants (1990), Angst and Other Psychological Burdens Among Migrants (Ängste und andere psychische Belastungen von Migranten, 1997), and The Psychology of Religiosity (1998).

His poetry offers a fascinating spiritual atmosphere (A Toast from the Cross, 1980) and also touches on patriotic themes (Emigrant Rain, 1981; Hercegorčina (Herzeg-Bitterness), 1985). He has also penned travelogues (Tako /ni/je govorio Isus (This is /Not/ What Jesus Said), 1987; Borders Are Here to be Crossed, 1993). His prose poetry is witty (The Palestinian Affair, 1984) and he also writes stage plays, some of which have been performed in the country and abroad (The Game of Life, 1973; Listen Galilean, 1988 and others). He is one of our foremost researchers of emigrant literature (45 Croatian Emigrant Writers, 1991; 60 Croatian Emigrant Writers, 1995). He served as the president of the Croatian World Congress from 1994 to 2005, making a massive contribution in this umbrella organisation to Croatian integration and unity. He is a regular contributor to serial publications of the Croatian Heritage Foundation (Matica magazine and the Croatian Emigrant Almanac).