Seventh Meeting of Croatians in Padua 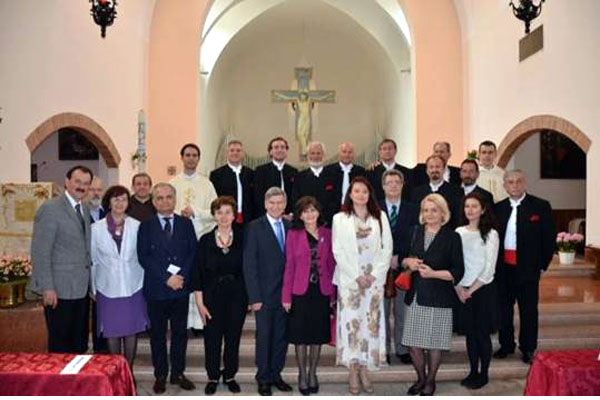 The Croatian Community in the Italian region of Veneto and the Pula branch office of the CHF played host to the celebration of St Leopold Mandić feast day and the 7th Meeting of Croatians in Italy. The event was staged at the St Leopold shrine in Padua. On hand were Croatian Ambassadors to Rome Damir Grubiša and to the Vatican Filip Vučak, our General Consul in Trieste Nevenka Grdinić, representatives of Croatian associations in Italy and of the State Office for Croatians Abroad.

The Croatian Community in the Italian region of Veneto and the Pula branch office of the Croatian Heritage Foundation played host to the celebration of St Leopold feast day and the 7th Meeting of Croatians in Italy. The event was staged on the 27th and 28th of April at the St Leopold Mandić shrine in Padua.

On hand for the event were Croatian Ambassador to Rome Damir Grubiša, Croatian Ambassador to the Vatican Filip Vučak, our General Consul in Trieste Nevenka Grdinić and Damir Murković of Trieste representing the Croatian Community and the Federation of Croatian Communities in Italy. Also on hand were Dubravka Severinski and Žana Ćorić representing the State Office for Croatians Abroad and Ana Bedrina, head of the CHF Pula office. Joining the meeting were Croatians from Slovenia, from the towns of Portorož i Kopar, and from the Croatian towns of Pula and Medulin.
The literary, musical and spiritual programme for the celebration of St Leopold’s day and the 7th Meeting of Croatians in Italy was provided by Dr Šimun Šito Ćorić and the Chorus Croaticus out of Bern, Switzerland.

Fra’ Šimun Šito Ćorić’s book Gli occhi colmi di terra (Oči pune zemlje/Eyes Full of Soil) was presented on Saturday, April 27th at St Leopold Mandić church. Dr Alessandro Tich spoke about the book and the work of its author. The Chorus Croaticus provided the musical interludes for this literary evening with a few songs from their repertoire, joined later by Fra’ Šito.

A literary and musical morning was staged at the auditorium of St Anthony’s basilica on Sunday, April 28th. Dubravka Čolak, president of the Croatian Community of Veneto greeted the gathered on behalf of the organisers of the Meeting, the Croatian Community of Veneto in Padua and the Pula branch office of the Croatian Heritage Foundation. The gathered were also greeted by Croatian Ambassadors Damir Grubiša and Filip Vučak, and by Dubravka Severinski of the State Office for Croatians Abroad.

Dr Šimun Šito Ćorić gave a lecture on the topic of Envy—Our Daily Torment and Burden. Musical accompaniment was provided by the Chorus Croaticus with a number of klapa style songs and by the lecturer.

Fra’ Šito Ćorić lead holy mass and gave a sermon on April 28th at St Leopold’s shrine, joined in concelebration by Fra’ Nikola and Fra’ Marko, two Franciscans active in this part of Italy. Mass was followed by socialising and a luncheon.

Read more and see the photo gallery at www.croatia.ch

2. May 2013.
Go to Top
Our sites use cookies to provide you with the best user experience. By browsing the web site, you agree to use them. I agree Read more
Privacy policy