Record Turnout for the CHF Winter School of Croatian Folklore 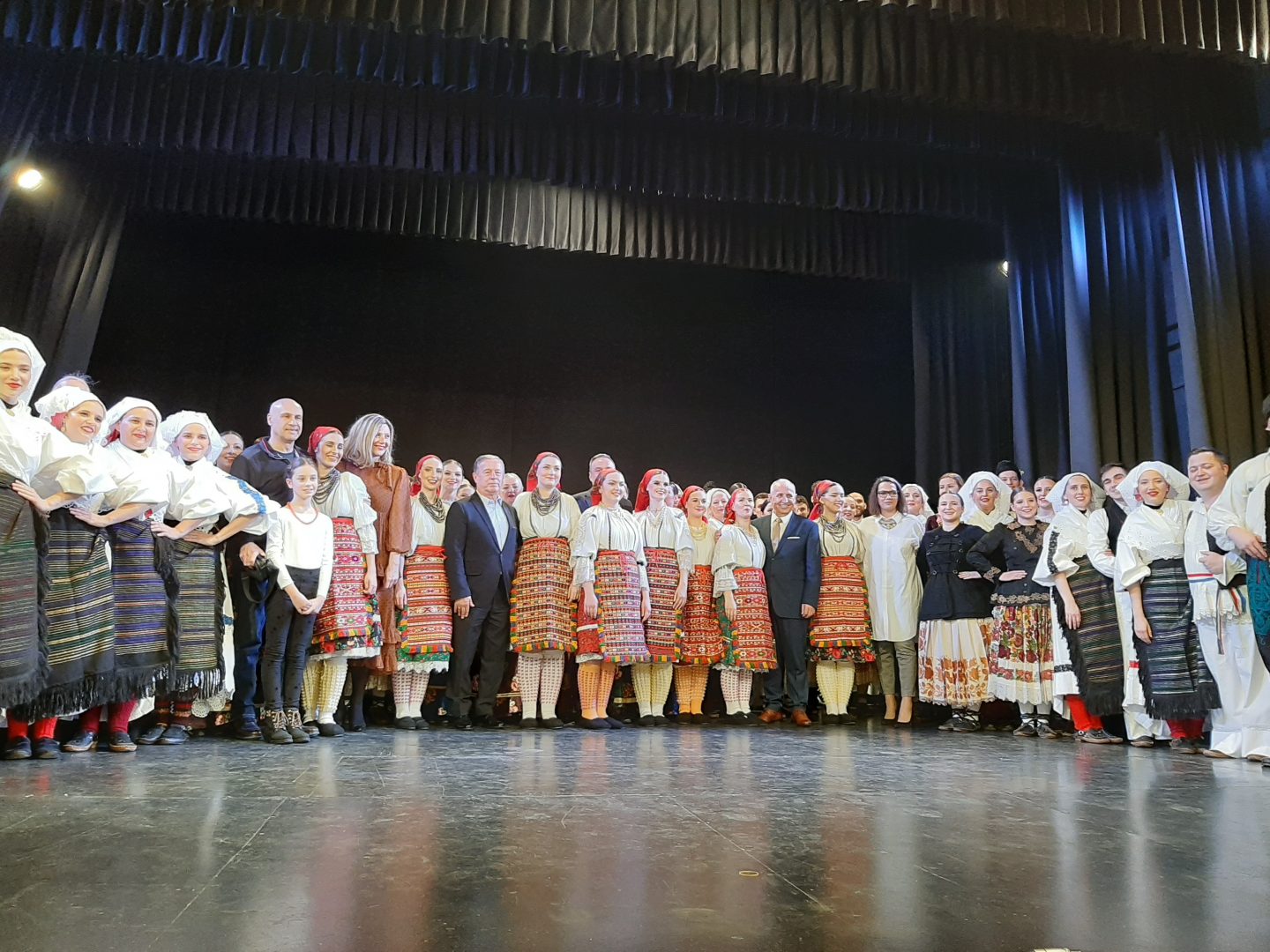 Ten days of learning, socialising, entertainment, songs and dance at the CHF School in Koprivnica drew participants from across our beautiful homeland and from Germany, Austria, Switzerland, Slovakia, the Vojvodina region in Serbia, Bosnia-Herzegovina, Hungary, Montenegro and Argentina.

CHF director Mijo Marić opened the final event of the CHF Winter School of Croatian Folklore on 12 January, a concert featuring the songs and dances of the Pannonian zone performed by the participants of this year’s course. He thanked everyone who contributed to the success of the course, including the City of Koprivnica, Koprivnica-Križevci County, the Hotel Podravina, the Podravka food company and in particular Andrija Ivančan, the team of lecturers he leads, and the over 150 participants of this year’s course who are proof positive that our traditional culture continues to be an active part of our lives today and has a future in the energy and love of the folk arts these people share. The entire concert can be seen on the Croatian Heritage Foundation Facebook page (with thanks to Tibor Bün for the live transmission).

The record number of participants came from across Croatia and around the world, including folklore enthusiasts from Germany, Austria, Switzerland, Slovakia, the Vojvodina region in Serbia, Bosnia-Herzegovina, Hungary, Montenegro and Argentina. Their round dance performance brought together people from all parts of the circle of Croatian culture, raising awareness of the importance of one’s own traditional culture, the foundation of our cultural identity.

This year’s course focused on the songs, dances and music of the Pannonian zone and the communities living in places and regions like Turopolje, Moslavina, Posavina, Bilogora, Slatina, Donji Miholjac, Orahovica, Našice, Nova Gradiška, the Požega valley, Baranja, the Valpovo area, Brodsko Posavlje, the Đakovo area, western Slavonia, the Županja and Vinkovci area and Srijem. Also studied were the dances of the Croatian communities of Vojvodina (Serbia), Hungary and the Bosanska Posavina area in Bosnia-Herzegovina. The theory lectures focused on kinetography (Labanotation), the basics of sheet music notation, and the folk costumes of the Pannonian zone.

The evening culture and arts programmes featured folklore ensembles from Križevci and the Križevačko Prigorje region, the KUD Prigorje of Križevci, KUD Tomislav of Sveti Ivan Žabno, and KUD Prigorec of Sveti Petar Orehovec. There was an unforgettable From the Tamboura to the Academy evening for the tamburitza players led by maestro Siniša Leopold and Tibor Bün, the director of the Tamburitza Orchestra of the Varaždin Traditional Culture Centre, featuring guest players of the Varaždin Traditional Culture Centre and a special surprise guest singer Filip Hozjak of the Međimurje region. The Peteranec association of women staged a workshop featuring the Peteranec white embroidery. Also on the event itinerary was a workshop featuring Pannonian necklaces and an exhibition of traditional jewellery.

For some of the course participants this was the first ever visit to Croatia. Mateo Pulfer was born in the Argentinean capital city of Buenos Aires in 1996, the third-generation descendant of Croatians who moved to this South American country (his grandparents have roots in Gospić, Zagreb, Vinkovci and Doboj and moved to Argentina, where they met, as children). Mateo studies classical music at the ESEM J. P. Esnaola school in Buenos Aires and leads the tamburitza ensemble of the local Association of Croatian Catholic University Students and Secondary School Pupils.

“It was really tough,” Mateo says, “At first, I was afraid that I would not be able to keep up with the pace and was really fearful. I would wake up early and practice to play better. The whole day was just lectures and rehearsals, and in the evening socialising and entertainment, and then practice again. I want to thank Tibor and Siniša Leopold—they’re really great teachers and have helped me a lot with their great patience to master the difficult and demanding parts we practiced. What I will remember above all is what wonderful people these folklore enthusiasts are. I got to know a lot of interesting and special people and found new friends who were really a great support and helped me find my way around and fit in better. I had a really great time at the final concert and it was just awesome. I saw that the audience was also having a great time and enjoyed our performance—it was something special. The people encouraged me to learn Croatian, which I would really like to do and I intend to apply to take part in the Croaticum course. I will visit Zagreb again to learn the language and take part in the work of one of the folklore ensembles and continue to learn about Croatian culture and, of course, take part in the [Winter] School [of Croatian Folklore] again.”

We hope that Mateo’s words and the stories he will carry back to his own homeland will encourage new participants to join an upcoming CHF Croatian folklore course so that we can sustain this great Croatian circle of culture.