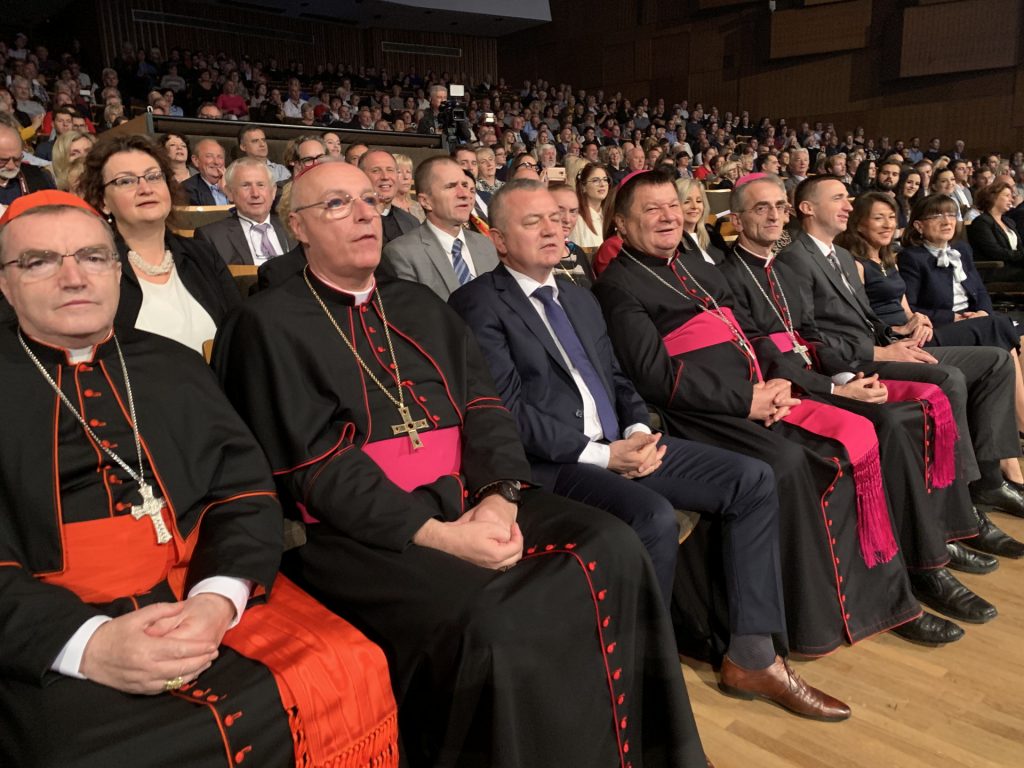 Zagreb mayor Bandić presented the Medal of the City of Zagreb to Roman Catholic bishop Živković for his contribution to connecting ethnic Croatians living in other countries with their ancestral land of origin. The bishop for his part presented gifts as a sign of gratitude to Zagreb and Vukovar and to Croatian Government as sponsors of the concert.

The recently founded cross-border Gradišće Croat association Hrvat S.A.M. (Slovakia-Austria-Hungary) staged the Pax et Bonum humanitarian concert at Zagreb’s premier concert forum, the Vatroslav Lisinski concert hall, on the 13th of October. The concert is in support of a kindergarten in Vukovar and was broadcast live by state broadcaster HRT, Croatian Catholic Radio and Radio Marija.

The concert was the brainchild of Egidije Živković, the bishop of Željezno (Eisenstadt), who also took part in the concert singing Neka cijeli ovaj svijet (“Let This Whole World”) from the musical Jalta, Jalta. Ahead of the concert he said his wish was to bring together these Croatian enclaves. “For five hundred years we have been divided and separated from one another, especially during the fifty years of the Iron Curtain, and we need to bring these folks together now. We are also looking to create bonds with what we call the old homeland. We want to come together with Croatia and with Bosnia-Herzegovina, and that is why this association was set up.”

He underlined the role of the Catholic Church in preserving the national and religious identity. “It’s a great miracle, but it’s also the truth. I come from eighteen generations of Gradišće Croats. The Church played a massive role from the start. Had the shepherds not stayed with their folks as they moved to new Pannonian lands, our people would have converted to Protestantism. Besides, for all these five hundred years it was only in the fold of the Church that the mother tongue was nurtured, as was our culture. The Croatian I learned to speak I learned in the family and in church.”

Živković also noted that the idea to help out the children in Vukovar emerged last year when he had led a mass in this eastern Croatian town. “It touched me somehow in my spirit. It is important that what I do in the faith is also accompanied by worldly acts. That’s how we came up with the idea of doing something for the children of Vukovar.”

The concert was organised by Hrvat S.A.M., a cross-border Gradišće Croat association, and the diocese of Željezno (Eisenstadt). Among the leading society figures joining the many who gathered for the event were cardinal and bishop of Zagreb Josip Bozanić, Vjekoslav Huzjak, bishop of Bjelovar and Križevci, Ivan Ćurić, assistant bishop of Đakovo and Osijek, Zagreb mayor Milan Bandić, Vukovar mayor Ivan Penava, economy minister Darko Horvat, and representatives of the Office of the President and of Croatian Parliament.

Overall leadership of the project was in the hands of friar Božidar Blažević, concert director Petra Radin, editor and scriptwriter Lejdi Oreb, and masters of ceremony Diana Tikvić, Branimir Gubić and Davor Meštrović.

Funds are still being collected via the humanitarian telephone hotline 060 9004 and will be used for the renovation of the kindergarten at No 27 Eugena Kvaternika Street in Vukovar.

The concert closed with Zagreb mayor Bandić presenting the Medal of the City of Zagreb to Roman Catholic bishop Živković for his contribution to connecting ethnic Croatians living in other countries with their ancestral land of origin. The bishop for his part presented gifts as a sign of gratitude to Zagreb and Vukovar and to Croatian Government as sponsors of the concert.