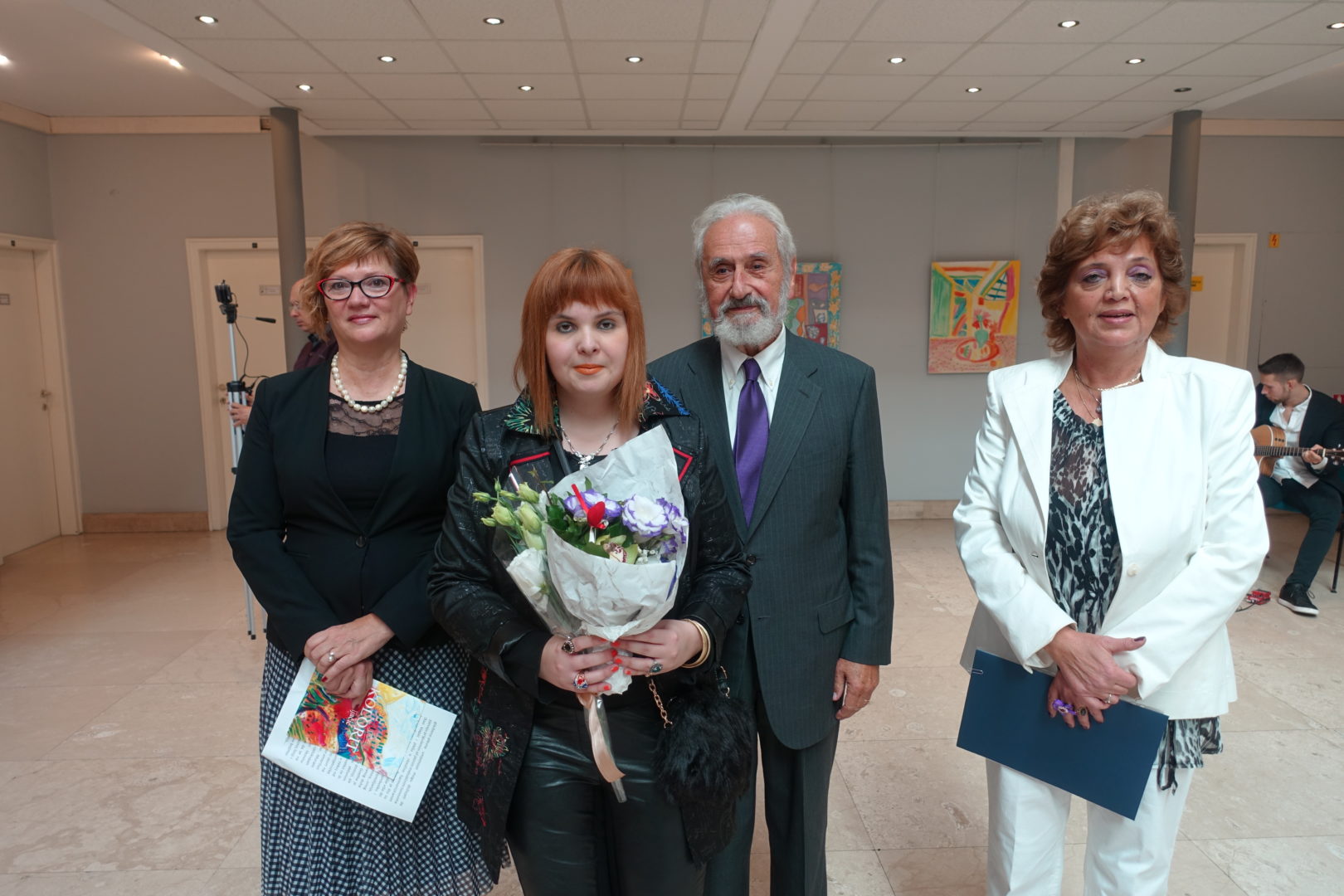 CHF executive secretary Diana Mašala Perković opened the exhibition on behalf of director Mijo Marić. She was joined by Snježana Jurišić, head of our culture department, and by academy trained painter and emeritus professor Emil Robert Tanay, who discussed the canvases on display.

An exhibition of Tessa Muljačić’s canvases was staged at the Croatian Heritage Foundation on Thursday, 24 October. Snježana Jurišić, who heads our culture department, the organiser of this event, welcomed everyone. She spoke of the long-standing and successful cooperation the CHF has with diaspora organisations and with ethnic Croatian minority communities around the world, and with the Croatian constitutive component of neighbouring Bosnia-Herzegovina, and spoke of the upcoming 70th anniversary of the founding of the CHF in 2021. CHF executive secretary Diana Mašala Perković opened the exhibition and spoke on behalf of our board of directors and director Mijo Marić. At the event to speak of the canvases on display was academy trained painter and emeritus professor Emil Robert Tanay. He noted, among other things, that Muljačić sees, observes, explores and “denotes” and that she finds inspiration for her own creations in existing works of art.

Muljačić has to date taken part in five group exhibitions and two solo showings (2015 and 2016) in Bratislava. In Croatia she has shown her work at the Sveti Jerolim Gallery in Stari Grad on the island of Hvar in 2018, and at the Bet-Israel Jewish religious community centre in Zagreb in 2019. This is Muljačić’s third solo exhibition since her return to the homeland. Writing for the catalogue of works Tanay notes that, “In observing Tessa’s images, the spatial redefinition of Monet’s, Van Gogh’s and Matisse’s colours, we see the author rotating an oval in a disc, and see lines dashing to shifting directions. If, however, we observe closely, we will see Tessa’s consideration of contrast in the chords of colour, the run off which ends in the silence of whiteness.”

Ms Mašala Perković followed her welcome by noting among other things that, “We are today opening the young Tessa Muljačić’s Kolorit exhibition. Tessa has transposed the sensibility of artists into her own understanding of the art of renowned painters—having lived abroad she had the opportunity to soak up numerous impressions and inspiration from all these diverse European cultures. It is to be expected that she will continue on this path and, availing herself of the global language of culture, will render the world a better place in which to live. Art and culture, as we all know, have always brought people together and made friends among nations.”

A native of Zagreb, Tessa Muljačić (1991) has attended a number of courses and training sessions in several European countries: the Netherlands, Croatia, Switzerland and Slovakia. After five years spent in professor Juraj Čutek’s studio in the Slovakian capital of Bratislava she received in 2017 a certificate confirming she had passed a school of visual art and drawing. She began her primary education in the Hague (the Netherlands) at The British School in The Netherlands (1997–2003), and completed it at the International School department of Matija Gubec Primary School in Zagreb. She undertook a secondary education starting with a two-year stint at the international department of Zagreb’s top-tier XV Gymnasium, before moving on to obtain a secondary diploma from the International School of Berne in Switzerland in 2010. She enrolled for German language studies at the Bénédict School in Bern, before moving on to continue studying at the Goethe Institute in Bratislava (2012–2017). Since returning to Croatia in the autumn of 2017 Tessa has worked and created in the studio of professor Emil Robert Tanay. The exhibition at the CHF is her tenth showing.

Also performing at the event was guitarist Jan Jakovljev.