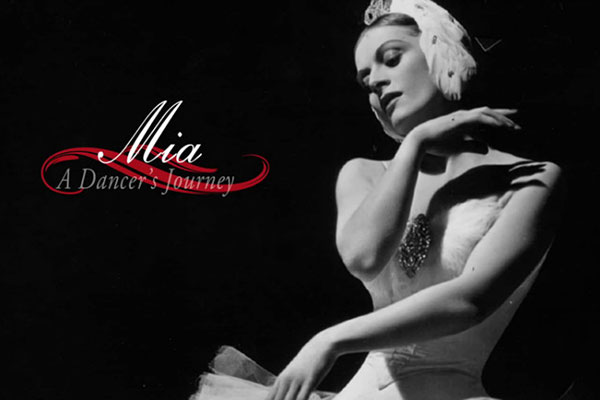 The Art Academy of Osijek declared 2016 to be the year of Mia Čorak Slavenska, a dedication joined by her native Slavonski Brod. A two-day symposium in Osijek and Slavonski Brod will gather pundits in the spheres of theory and practice: dance, theatre, history, art history, literature, film, culture studies and pedagogy.


The movie Mia, a Dancer’s Journey had its premiere screening last year in Los Angeles. The film tells the life and artistic story of Mia Čorak Slavenska. The documentary on this renowned native of the Croatian town of Brod na Savi was ten years in the making and brings to life Mia’s brilliant dancing. It won an award in the art & culture/history category at the 67th American television Emmy award ceremony. On hand to accept the award were producers Ted Sprague, Kate Johnson and Brenda Brkusic, on behalf of the artist’s daughter Maria Ramas. Ramas was born out of Mia’s marriage with Austrian actor Kurt Neumann and the movie is based on Mia’s unpublished autobiography. The movie also picked up a Golden Mike Award at the 66th annual ceremony presented by the Radio & Television News Association in the best documentary category.
From her native Brod na Savi Mia Teodora Dragica, the daughter of Milan Čorak and Hedviga Čorak née Palmer, moved to Zagreb in 1917. She performed at the Croatian Hall in Brod na Savi in 1929 as an already affirmed dancer, and in 1934 won the title of prima ballerina. She was the first Croatian prima ballerina to perform at the Croatian National Theatre in Zagreb. In the mid 1930s the papers raved about her dancing. Slavenska broke into the international ballet scene at the dance Olympics in Berlin in 1936, although her true international debut was in Paris in 1938. She is known for her performance in the 1937 movie La Mort du Cygne, which was a major hit in the United States of America under the title Ballerina. She came to America with the Ballet Russe de Monte Carlo and by the 1950s was running her own troupe (the Slavenska-Franklin Ballet). She danced all the great ballet roles but will always be remembered for her interpretation of the role of Blanche DuBois in A Streetcar Named Desire. She opened her own dance studio in New York in 1960. In 1969 she moved to Los Angeles and taught ballet at the California Institute of the Arts and at UCLA. One of the three greatest ballerinas of the twentieth century and certainly one of the greatest ever Croatian ballerinas, she passed away in 2002 in California. The urn containing her earthly remains was moved to Zagreb’s Mirogoj cemetery in 2005.
In spite of her massive success abroad she was little, if at all, appreciated in her homeland. She was not, however, entirely forgotten, as evidenced by the biennale ballet competition named after the international star that has been staged in Zagreb since 2008, organised by the Croatian Society of Professional Ballet Artists. The competition features the Slavenska Dance Preservation Award and is held under the auspices of Maria Ramas. The first Croatian documentary film about Mia, director Jakov Sedlar’s Slavenska Nostra, premiered at Zagreb’s Croatian National Theatre in 2004. Sedlar shot the forty-five minute documentary four months before the passing of the artist in Los Angeles. That same year saw the promotion of a monograph, Mia Čorak Slavenska, by authors Maja Đurinović and Zvonimir Podkovac, published by Naklada MD and the Slavonski Brod chapter of the Matrix Croatica. Dance publicist Đurinović is the top domestic expert on the work of Čorak Slavenska. A decade later the electronic photo-monograph Mia Čorak Slavenska – Places and Paths by prominent journalist and publicist Stribor Uzelac Schwendemann of Slavonski Brod was promoted in the frame of the 2014 Days of Dance. This competition, dedicated to the great ballerina, will be staged this year in Slavonski Brod for the 13th time.
The Art Academy of Osijek declared 2016 to be the year of Mia Čorak Slavenska, a dedication joined by her native Slavonski Brod. The programme kicks off on the 20th of February, on Slavenska’s birthday. A two-day symposium in Osijek and Slavonski Brod will gather pundits in the spheres of theory and practice: dance, theatre, history, art history, literature, film, culture studies and pedagogy, and dance enthusiasts will have an opportunity to enjoy a week of dance programmes.