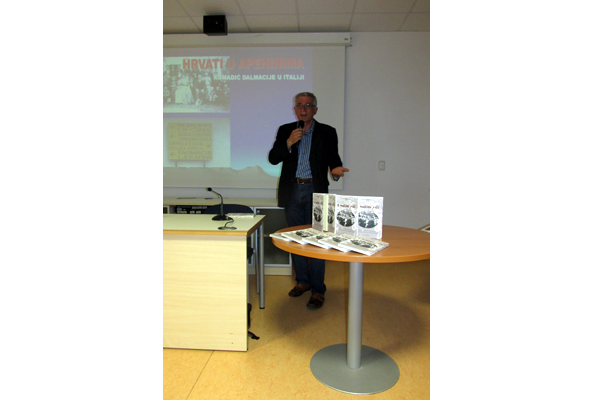 Antonio Sammartino gave a lecture on the “Croatians of the Apennines – A Piece of Dalmatia in Italy” and presented S našimi riči (In Our Words), a collection of poetry.

The Days of Italian Culture are staged every year in the Croatian coastal city of Split, organised by the Marko Marulić municipal library and the Dante Alighieri Croatian-Italian Association. This year the Agostina Piccoli Foundation of Mundimitar and its president Antonio Sammartino were invited to participate on the 13th of May. There is, namely, great interest for the culture, dialect and cuisine of the Molise Croats in this area. In spite of the fact that this was not the first ever presentation of the Molise Croatian culture in Split, it attracted great interest among the city’s denizens.
Antonio Sammartino gave a lecture, accompanied by a video projection on the “Croatians of the Apennines – A Piece of Dalmatia in Italy.” It opened with a small skit put on together with his wife demonstrating the differences between the Molise dialect of Croatian and the literary standard.
For the occasion Mr Sammartino presented the latest, fourth, collection of poetry written na našo (“in our language”), meaning in the Molise Croatian dialect. The volume is entitled S našimi riči (In Our Words) and is published by Agostina Piccoli, with a foreword penned by writer Đuro Vidmarović.
The audience was particularly interested in the legendary tale of how Duke Mirko led a group of Croatians over the Adriatic Sea to the Apennine peninsula one Friday in the month of May five hundred years ago. Mirko is now a surname among the people of Molise and to this day they say that they came from “that side of the sea.”

Their dialect is frozen in time, and it is studied with great interest by Split native Nepo Kuzmanić, an expert in the history of the city of Split.
Behind us is yet another wonderful meeting, yet another presentation of the small Croatian community in the hinterland of the Italian town of Pescara that nurtures the culture and language of its ancestors in a time when minor languages are disappearing in a global linguacide – and it is in language precisely that lies the identity of every nation.